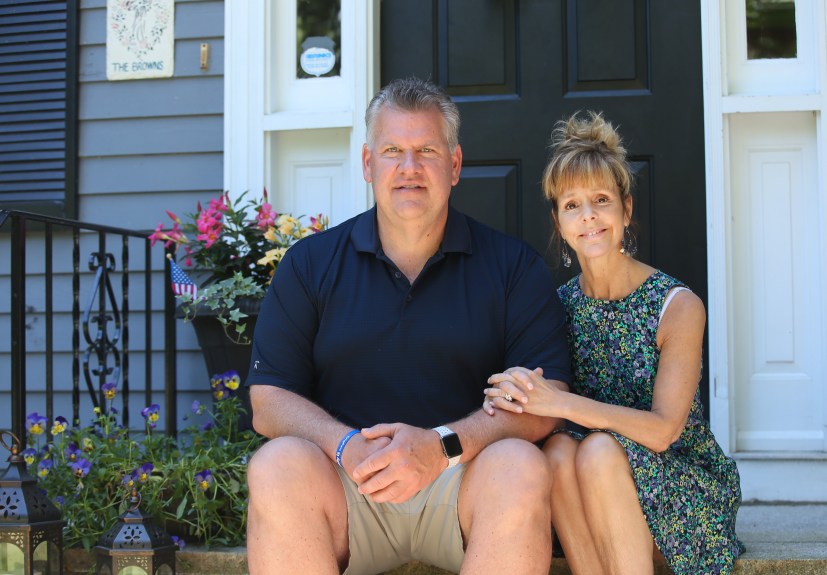 As Wellesley athletic director John Brown sat inside his house on the living room couch with his wife Jennifer on an ordinary day less than a month ago, a grand realization dawned on him in the simplest of moments.

Watching television, John wasn’t getting repetitively whacked on the arm by Jennifer. And Jennifer, whose uncontrollable arm movements joined a list of impairments she’s developed over the last 15 years with Huntington’s disease, was finally seeing results from the trial medication she started back in November.

Her movements, which she sometimes didn’t notice she was doing, were slowing down.

For someone who had once pretty much accepted there was nothing to be done about the disease and to live with it a few years earlier, this wasn’t just a big step. It was a huge one.

“My husband kind of noticed right away,” Jennifer said. “Things like that really make a big difference.”

Combine Parkinson’s disease, ALS and Alzheimer’s together, and that’s what comes with Huntington’s disease — which is a nasty disease that causes the progressive breakdown of nerve cells in the brain and deteriorates a person’s physical and mental abilities during their prime working years. Children of those with Huntington’s even have a 50% chance of acquiring the gene.

Jennifer and four of her six siblings got it from their mother, with each sibling in worse off condition than she is. Jennifer has lost a lot of her short-term memory herself, and can’t do many regular tasks at the house due to physical limitations. John says leave it to Jennifer to always find the brighter side of things and still feel blessed, but based on what they’ve seen in her siblings and her late mother, it’s been hard over the years to take away too much positivity from it.

Yet, on Saturday, the Browns continue their new tradition of raising money and participating in the Huntington’s Disease Society of America fundraiser “Team Hope Walk” at Castle Island to help fund whatever growth in research is possible.

Ten years ago, that sort of effort felt a little hopeless. Now, after seeing all the ways screenings and treatments have advanced, that isn’t the case anymore.

“There’s a lot of good things happening,” John said. “Fundraisers like this, that they try to raise money to help these types of things, is really important to us. … If this is something where we can help raise awareness and help this cause, that’s what we want to do.”

The first year the Browns raised money, they fundraised the most in Massachusetts with $13,000. Jennifer even won an award for how she was promoting awareness and contributing toward a solution. This year’s current total is a bit shy of that mark, but the $8,000 they have is approaching their $10,000 goal. According to the Massachusetts and Rhode Island Chapter of the HDSA, the event at large has raised more than its goal of $52,000.

Speaking out on the matter to get these funds is such a huge part of the Browns’ lives now, but that is a far cry away from how they felt even just three years ago.

As far as John saw it, there was no cure for it, so why should they bother? Truth be told, he didn’t even want Jennifer to get tested for the gene that says if you’ll develop symptoms or not. They thought it was important to just live life. She was tested 15 years ago anyway after a lifetime of knowing she could get it, but from there, mum was the word. They didn’t communicate much about it, especially not to their three children.

They wanted to wait until the kids were old enough to fully grasp the magnitude, so they were near telling the three of them when the youngest was about 16 years old. That secrecy was at least until their middle child accidently found out about the disease from a nurse at Beth Israel, and John and Jennifer had to get the kids more involved.

“It’s a disease nobody really knows about because I think a lot of people are in the same boat we were. You just keep quiet, you don’t want your kids to know,” John said. “We never talked about it, and that’s part of the problem. … Now that the family knows, we’re trying to do some fundraisers to help.”

Boy, are they lucky they did, though.

When Jennifer speaks of the most horrible part of Huntington’s, she said it’s the fear of one of her children getting it and having to suffer. But every step of the way, her three kids have been as helpful as they can be for their mom, not necessarily thinking about what will happen to them.

Brittney, the middle child, is the one that found this walk in the first place. The boys help when they can, helping John assist Jennifer as he works a full-time job at the school.

“I feel very blessed with how wonderful they are,” Jennifer said. “I can’t do things the way I used to. They help out in any way they can.”

When Jennifer goes to the event, she attends knowing just how much the event has benefitted her with the trial drug. Now, she wants to keep helping to create a future where her kids don’t need to experience Huntington’s the way she and her siblings have.

The walk is a start.