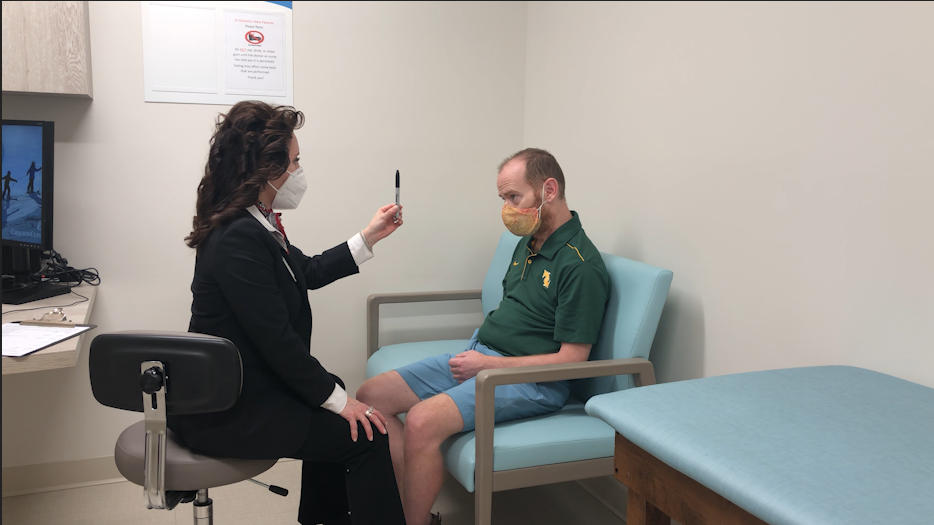 By Kelsey Jean-Baptiste and Colleen Guerry

SALEM, Va. (WFXR) — May is Huntington’s Disease (HD) Awareness Month, meant to draw attention to a rare yet deadly genetic disorder that impacts thousands of Americans, including a Salem man named Mike Doherty.

In November 2018, Doherty was diagnosed with Huntington’s.

Since Doherty was adopted, he did not have access to medical records saying that one of his birth parents had the gene for the disease. If he had those records, he would have known he was at risk of inheriting Huntington’s, as well as his children.

So, what is Huntington’s Disease?

According to a spokesperson for the Huntington’s Disease Society of America, it is “a fatal genetic disease that affects the nerve cells in the brain that is described as having ALS, Parkinson’s, and Alzheimer’s disease all at once. Today, there are approximately 41,000 symptomatic Americans and more than 200,000 at-risk of inheriting the disease.”

Doherty used to be a lawyer, but when he started having memory loss at work, his wife, who is also a geneticist, told him to get tested for Huntington’s.

After he did, it changed his life forever.

“I used to play golf, I was a lawyer, I used to go to the symphony, I used to love backpacking and hiking,” Doherty said. “Now I can’t do that anymore.”

Doherty eventually stopped practicing as a lawyer and applied for disability benefits.

However, Doherty doesn’t let that bother him. In fact, he uses humor to raise awareness about Huntington’s Disease.

“I have a YouTube channel called HD Find The Funny, where I like to make fun of things, like ‘am I still smarter than a fish?'” said Doherty.

Doherty says the YouTube channel is his way of communicating to those who want to learn more about the disease in a light and comedic way. On the page, viewers can find funny videos of him showcasing the symptoms of Huntington’s Disease, physical therapy, and more.

“It’s kind of sad, but I try to move on. I try to have a positive attitude. In my family, we always make fun of stuff,” said the Salem man.

Doherty and his wife, Emily, have two kids — Teddy and Alex. The couple had to sit down and explain to their children that because their dad has Huntington’s, they have a 50/50 chance of inheriting the gene.

According to Doherty, with the help of Dr. Bonnie Hennig-Trestman, the director of the Carilion Clinic Huntington’s Disease Program in Roanoke, the family is slowly going through the process of Huntington’s together.

Doherty says that his son, Teddy, wants to get tested at 18. However, his other son, Alex, does not because he says it won’t change anything.

Dr. Hennig-Trestman says getting tested is never a right or wrong decision to make, adding that it’s something with which people need to be comfortable.

“I’ve been in the Huntington’s community for over 20 years, and I have talked to people who have done that dance. They are not ready. When they are ready, they will come in, we will talk to them to test to see if they have that gene,” said Dr. Hennig Trestman.

Dr. Hennig-Trestman, alongside Virginia Tech medical student Abigail Ruffle, is recruiting patients for an online study to learn more about their experience with the disease and the stigma around it.

According to Dr. Hennig-Trestman, the partnership with Virginia Tech Carilion School of Medicine is meant to acknowledge the population of people with Huntington’s Disease, or the gene, in the Roanoke Valley.

“When I came down here from the North five years ago, there were people right in my community with Huntington’s Disease. When we looked at people’s charts at Carilion and queried them, we found that there are probably about 100 patients with some type of Huntington’s Disease listed in their charts,” said Dr. Hennig-Trestman.”